A message from Karen

Hello to you all,
I am writing you this message to inform you that artSPACE durban continues to change and it is, therefore, time to thank you again for all the support in the past and wish you all the best for the future.

Claus and I have been gone now for nearly two years and I have continued working with Vee to organize exhibitions in the much smaller artSPACE durban gallery spaces and this has now come to an end.

Corne's exhibition was the last exhibition organized by Vee and myself.

We will now concentrate on our new gallery in Funchal, Madeira and I can spend more time producing art.

We will continue be in touch with you to exhibit your works in our new gallery as it is now becoming better known and the turnover increases.

See what new things are happening at 3 Millar Road on Facebook! 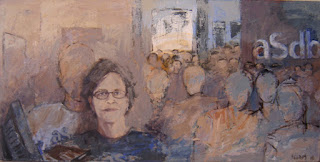 Posted by artSPACE durban at 13:46 No comments: