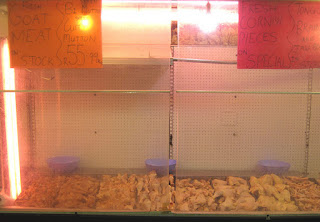 The focus of Celia Sidler's work is the aesthetics and influences of the food and publicity industries. The effects of globalisation on local markets and the role of publicity in influencing consumption are ever-present in her projects, which typically involve found objects. Whilst in South Africa, she will focus mostly on new inspirations drawn from her encounters with new people, food, animals, and material objects.

For the opening Sidler has organised an Indian family, who will cook mealies, so everybody is invited to come and to eat. It’s also one part of her show, it belongs to it, so it's not just an opening meal, it is an action.
Artist in Residence, Pro Helvetia, Swiss Arts Council
Posted by artSPACE durban at 11:14