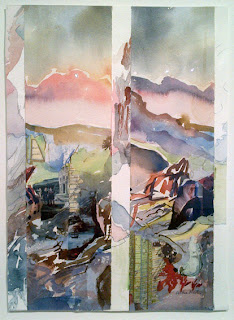 Exhibition of collage and watercolour  by Anthea Martin

I have been interested in looking at The South African landscape and the question of ownership, identity and
memory.  In its pre-colonial history, the land was occupied by people who had been there for centuries but who had no concept of personal ownership or a written language to enforce their claims.  The exploration and colonization of land was a question of establishing ownership.  As is well known, this led to war and conflicts that are still in process.  It is the mountainous areas that remain untouched by human settlement because of the difficulties of inhabiting such areas but they also remain under dispute according to heritage or conservation issues.

“Its recent history offers a means to reimagine the South African landscape, not as a series of apparently stable, discrete, areas of land, but rather as a connected site of complexity and ambiguity, where the construction of stability is rejected in favour of the uncovering of layered networks and meanings, which are embedded, one within (or over or beneath) the next.”

I dedicate this exhibition to Thomas Baines (1820-1875), who was an indefatigable explorer and recorder in Southern Africa of the flora, fauna, mapmaker, landscape and its indigenous people.
In his letters he often complained that he had shoot game for food, repair wagons, cut wood, build shelters, tend sick animals and people on the expedition, as well as find time for his first love which was drawing and painting.
Posted by artSPACE durban at 10:11