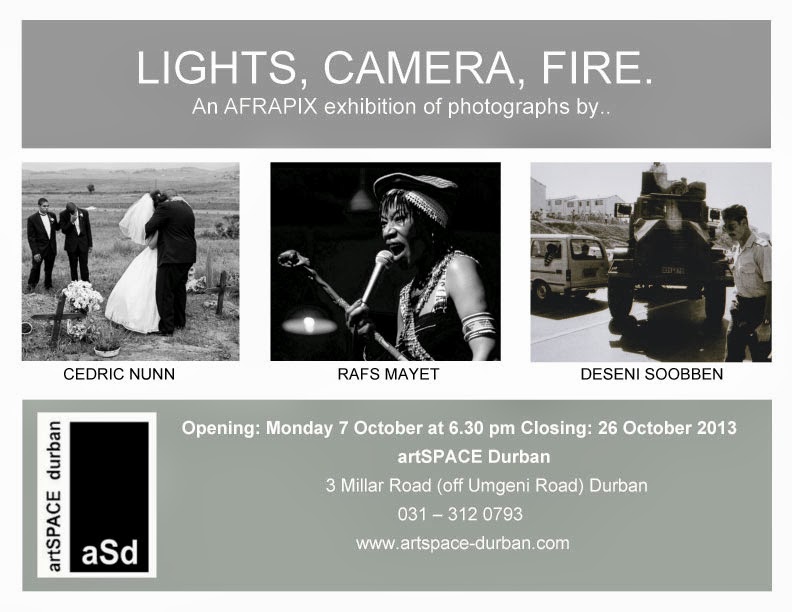 
All three photographers were contributors to Afrapix Photo Agency in the eighties. This exhibition – far from being a comprehensive overview of the important role Afrapix played in communicating and archiving key years in South Africa’s transition – is more of a selection of photographs by the three photographers combining images not covered by the mainstream media of the day. Interspersed with the social commentary are personal photographs - the exhibition is both a personal and the political narrative of a South African prior to the first democratic general elections.


“This exhibition is a smaller fore-taste of a bigger, more comprehensive exhibition by the KZN branch of Afrapix which is happening to coincide with 20 years of democracy next year.  This will include the work of people like Pax Magwaza; Billy Paddock; Omar Badsha; Jeeva Rajgopaul; Myron Peters and others,” says Rafs Mayet..


Afrapix was a national collective of progressive photographers. They had a KZN office in Omar Badsha’s darkroom in Good Hope Centre in Queen / Denis Hurley Street.


“Afrapix was a photographic collective that operated for most of the eighties and tried to cover the stories and realities of life back then, especially that which was ignored by the mainstream media. We did a lot of work for a broad range of organizations that were opposed to Apartheid - including political, religious, cultural, media, sporting and a host of others as can be evidenced by the photo of the first march in Durban in September 1989. Besides this kind of work we also had our own projects going on at the same time. This was really a form of release and relief from what we were experiencing on a daily basis. I found refuge in documenting musicians especially at the Rainbow jazz club in Pinetown - a mission that I'm still busy with to this day,” says Mayet.


“I'm not ashamed of the epithet "Struggle Photographer" that gets applied to us and our work as I feel that we, in our own small way, contributed to the relative freedom that we all enjoy today!” he said.


Deseni Soobben is currently a lecturer with  Durban University of Technology Journalism Dept at City Campus.  Her work with Afrapix included photographs of the emerging UDF, violence torn KZN midlands, civil protest action which were distributed across the world. She worked at City Press with S’bu Mngadi and Fred Khumalo and started lecturing at DUT when it was still ML Sultan. Her specialist areas of interest are photography, media, culture and gender - and to this end has based her master’s research dissertation on the photographic representation of women in the print media.


Cedric Nunn was one of the prominent photographers documenting the resistance against apartheid in the 1980s. In 1994 he was part of a team of photographers documenting South Africa’s first democratic election for the Independent Electoral Commission. From 1998 to 2000 he served as director of the Market Photography Workshop in Johannesburg. He teaches and mentors local and foreign photography students and serves on the board of the Bensusan Museum of Photography in Johannesburg. He has also taught at the Wits School of the Arts, New York University Tisch School of Arts exchange programme and the School for International Training.


Rafique (Rafs) Mayet has explored a myriad jobs – including producing for Capital Radio. In 1983 Omar Badsha taught him the basics of photography and he started working on the Daily Dispatch in East London, the New African in Durban and he became a member of Afrapix. He has participated in numerous exhibitions – in South Africa and abroad. He also worked for the IEC during the first election in 1994. He is perhaps best known for capturing moments of musical brilliance – especially in the genre of jazz. He has been a recipient of a Too Little Too Late Award from CFAD.

[text by Illa Thompson]
Posted by artSPACE durban at 10:27