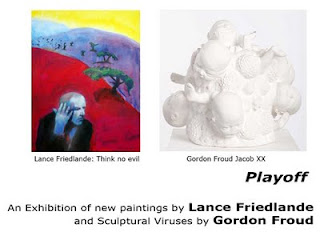 The exhibition PLAYOFF calibrates the individuality of the creative process, highlighting similarities and differences between the activities practiced by both artists to produce their work. Similarities include: using creativity to resolve self generated problems, the use of words to stimulate content, an evolutionary process in the method, and the practice of setting up an ongoing dialogue between the artist and the work which influences the outline. Also important for both artists is finding joy in the creative activity resulting at times in playfulness in the process as well as in the completed artwork.

In spite of these and other process similarities, the works of the two artists remain very different and offer a duality or Play-off against each other that makes the exhibition work well as an interesting two person show. This exhibition has travelled from Potchefstroom University to Oliewenhuis Museum in Bloemfontein, will be shown at artSPACE durban before finishing its run at the Pretoria Art Museum from October to December 2011.
Posted by artSPACE durban at 16:59