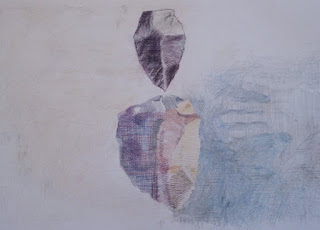 “Signs of Usage”
a solo exhibition by Terence King

The exhibition comprises works selected chiefly from two extended series’ undertaken over the past several years. Rooted in observation of the physical environment and of utilitarian implements, the paintings and drawings are related in that they are intended to reflect a world of work – hence usage.

The ways in which the land is shaped by occupation, intervention, geological time, and how mundane objects of domesticity and labour come to take on a quiet monumentality, are central elements in these series.

The painting process itself, that is painterly, loosely layered and excavated brushwork used in combination with detailed, identifiable moments, aims to convey a sense of the multiple histories of familiar places and objects. The objects, mainly tools, containers and the like, and the environments, in this instance the symbol-laden hills of the interior, carry ubiquitous signs of use, such as scarring, demarcation and alteration, and are presented in simple, non-hierarchical compositions.
Posted by artSPACE durban at 13:22